Gosh, I’ve been pretty bad about updating here lately.  What can I say?  I’ve been a busy beaver for sure!  The holiday’s had me swamped and then it was birthday parties and traveling and out of town guests galore!  Last weekend, we hosted T’s 7th birthday party here at home.  Even though I never managed to get A’s Sheriff Callie party blogged (I better do that today too!), I thought I would go ahead and get the details for the Carnival party blogged while they were still fresh on my mind.

We decided about 3 months ago that we would be going with a Carnival theme and took to pinterest immediately to begin planning.  A few weeks before the party, I took her out in some colorful clown garb to snap a few photos for her invitations.  They’re pretty goofy but they’re probably my favorite pictures ever of her because they really let her silly personality shine!  Here are a few of my favorites! I normally have really cute double sided photo invitations printed from my print company but, unfortunately, I procrastinated a bit and ran out of time.  Instead, I had them printed 2 to a page at my local office depot.  They had them printed and cut down to size for me within an hour and they were on their way to the post office that afternoon!

Meanwhile, we begin gathering supplies and prizes for the games and sketching ideas for setup in chalk in the garage and driveway.  Haha  We decided that since A. I would be returning from camp with my oldest the night before the party and B. The party was in the afternoon that we would not serve a full lunch menu but instead opted for snacks and sweets.  While I was at camp, I enlisted my hubby and mama to transform our garage into a big top canopy by using plastic tablecloths.  We’ve used this method for many parties and it always works so well.  Gives us an ample party space while still being whimsical and colorful.  You almost forget you’re in a garage.  Thankfully, weather for both my girl’s winter birthdays has been absolutely perfect! 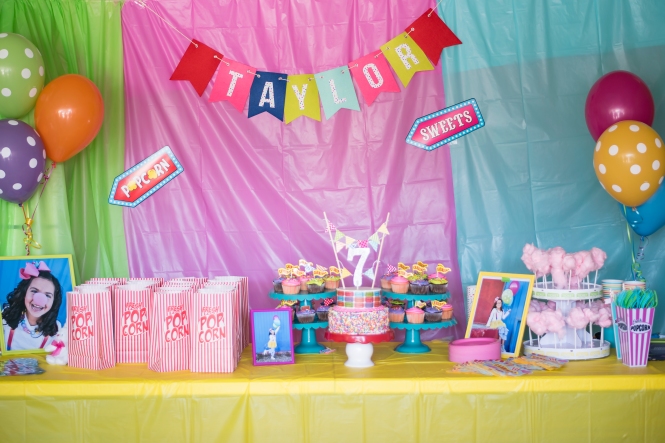 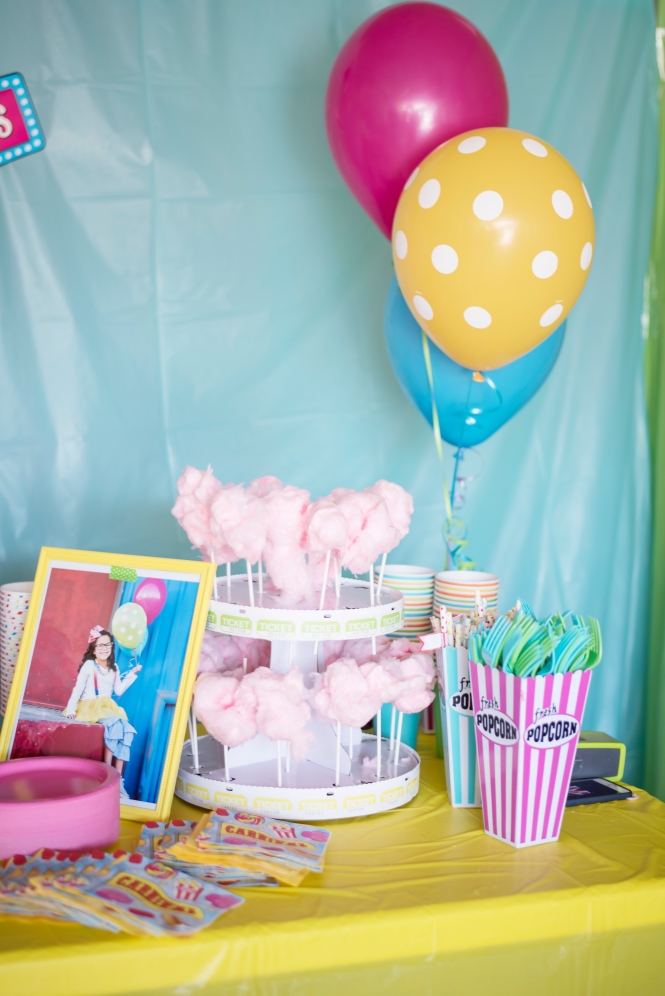 I wish I had taken a better picture of the garage because it looked super cute but you get the gist here.  We served popcorn, cotton candy, cake, and ice cream.  I got the cute little carnival napkins at Hobby Lobby, as well as the little cotton candy stand, and the marque looking signs.   Most of the other table decor came from the dollar spot at Target!  We found the colorful popcorn containers there as well as the felt birthday banner and letters, and the cute little red cake stand.  Because I didn’t have a lot of extra time or energy for cake decorating, I picked a super simple design and I’m pretty pleased with the way it turned out.  I rolled the bottom tier in sprinkles and for the top tier, I designed cute little ticket strips with her name and birthday in photoshop and then took it down to my local Wal Mart bakery for them to print on an edible image.  It was quick and easy and the image only cost about $7!  I got the little pennant banner, cupcake flags, and glitter 7 at hobby lobby too.  I bought bags of cotton candy from our local Golden Corral for $1.25 each and just divided them into small portions and put them on lollipop sticks.  They made for a cute display and kids weren’t consuming giant portions of sugar so it was a double win!

We had 5 game stations so each kid was given 5 tickets when they arrived (I got these at dollar tree!) so they each got to try each game once.  Because we had extra time and more prizes once each kid had a turn, we allowed them another set of tickets if they wanted to continue playing which most did. We also hired an amazing local face painter.  She was a huge hit with the kiddos!  Our carnival games were simple and inexpensive as were our prizes.  Most were purchased at the dollar tree with the exception of the pet fish soap which I made myself.

The balloon pop station was the biggest hit I think.  To assemble it, we used squares of cork board purchased at hobby lobby attached to a piece of plywood we had laying around.  We used thumb tacks to attach the balloons and darts with plastic tips for the kids to throw.  If they popped a balloon the selected a prize (bubbles or play dough) and if they missed they got a piece of candy.  They each got 3 tries per ticket.  We got the dart balloons on amazon and the darts 3 to a pk for $1.97 at Wal Mart.  We blew all the balloons up prior to the party and placed them in trash bags.  We just did a little at a time and within a couple of weeks had them all blown up!  🙂

For the fish bowl game we used small clear plastic cups from walmart filled with water.  We dropped a plastic fish toy in several of the cups and kids had to toss ping pong balls into the cups.  They got 3 tries per ticket and if they got it in a cup with a fish, they got to take home a pet fishy bath soap.  I made these easily by purchasing a large block of clear glycerine soap from Michael’s with a 50% off coupon.  It totaled about $10 and I still have a ton left for a future craft!  I purchased the vinyl goldfish on Amazon.  They were so simple to make and the kids had a blast helping me.  We cut the soap into smaller pieces and placed them in a microwave safe bowl.  We melted them in the microwave and then poured the liquid into small plastic treat bags sitting in mugs.  We then moved the bags to a bowl of ice water where we used a skewer to push fish toys down into the soap as it hardened.  If you choose to add scent to your soap, mix it in with the bowl.

For the ring toss, we had the painstaking job of drinking beer to empty those bottles!  I gave my husband that job weeks in advance thinking they would be done waaaaay ahead of time but the week before party time, we only had 2 bottles sitting on the counter!  Luckily, we attended a Super Bowl party the weekend before and managed to collect enough!  lol  I spray painted the bottles and caps and found those super cute carnival soda labels at Hobby Lobby.  The kids each got 3 rings (which were harder to find than I imagined).

For the lucky ducky game we purchased 50 rubber duckies and this inflatable pool from Amazon and glued washers to the bottom of each duck.  We painted about 12 with nail polish first.  The kids got 3 tries to pick a duck with a colored washer on the bottom to win a prize.  They got a piece of candy if they didn’t pick a winning ducky.

Last but not least we had a bean bag toss.  I didn’t get any pictures of this but it was pretty simple.  We used a lawn game set we already had from Academy and set it out side by side that way 2 kids could play at once.  Each got 3 bean bags.

After a stop at the face painting booth, our guest were ready to have their picture taken in the ring of fire.  I had my oldest and a friend make this using a hula hoop we found at the dollar tree and red, yellow, and orange tissue paper.  Made for a cute photo prop! 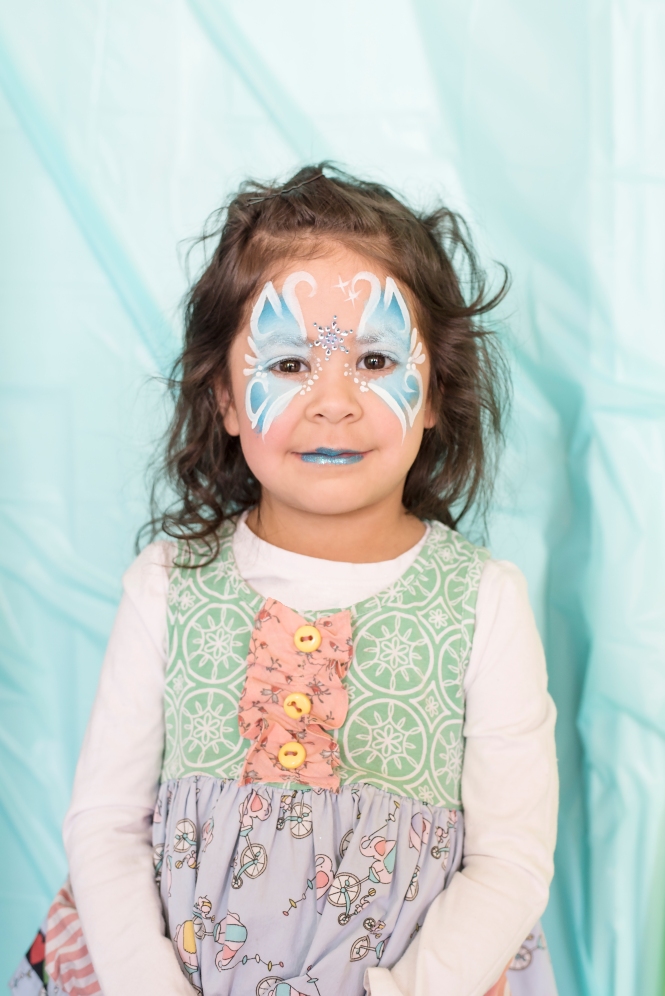 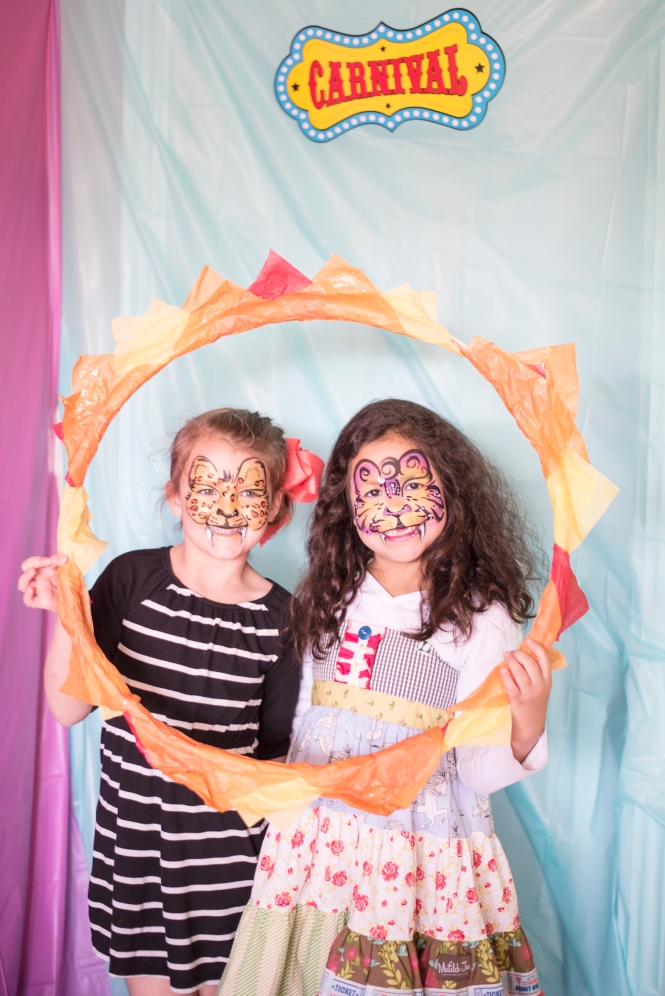 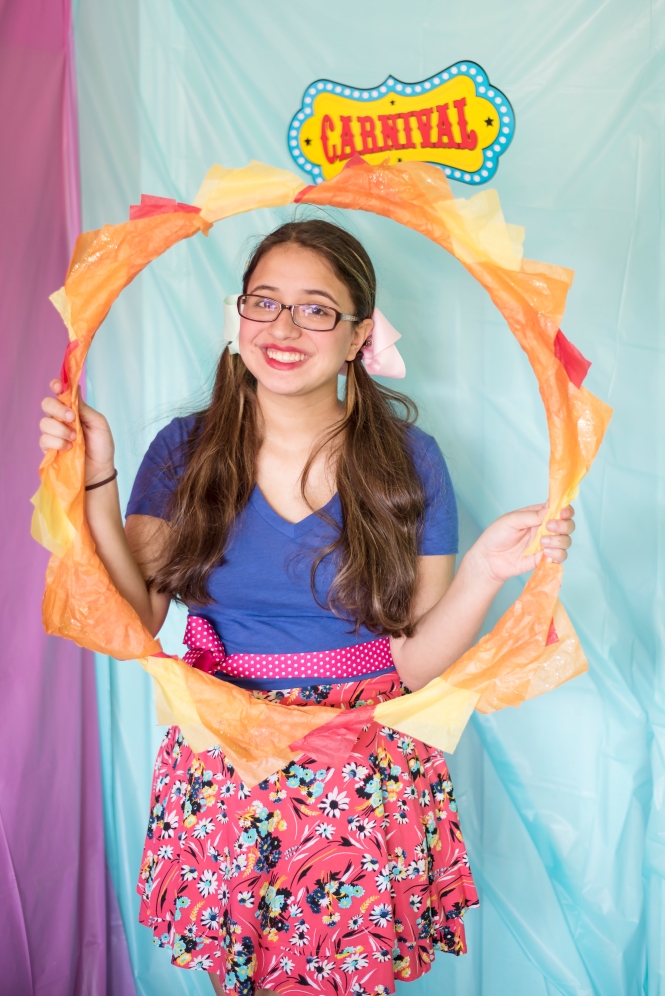 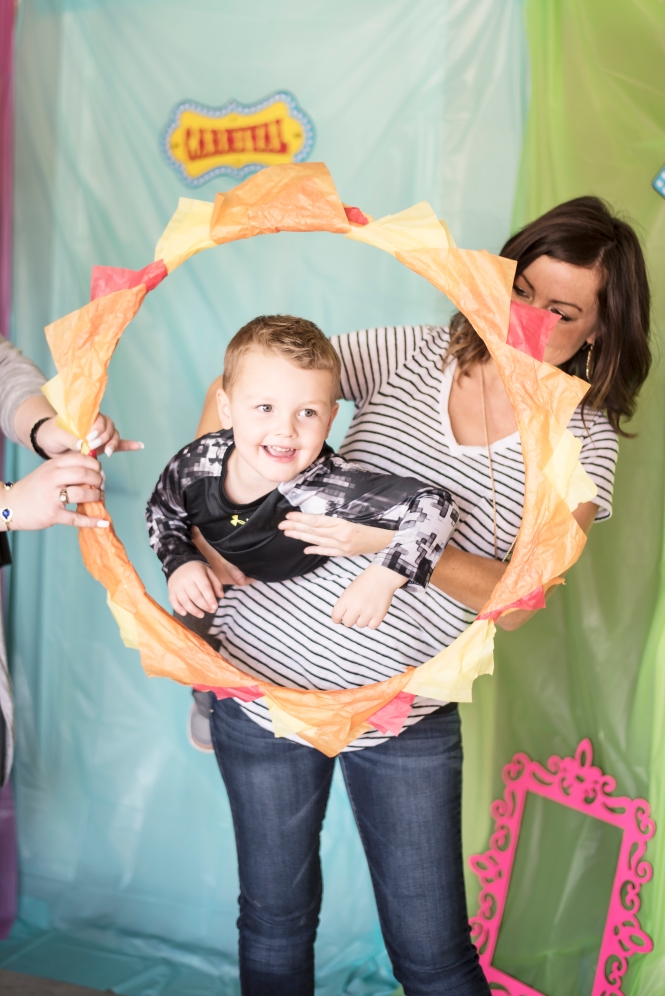 Overall, I think a great time was had by all.  Even this ole top hat wearing Ring Master!  Thanks to everyone who came to make our girl’s day extra special!