Everyone is always raving about my apple pies so thought I would share my process with y’all. The greatest part is, you can use your leftovers to create an additional goody: baked apple cinnamon cups. Yummmm!

I think everyone is going to be shocked by how easy this is. Seriously, everything I make is easy and quick even if it doesn’t look like it at first glance.

I do sometimes make my own crust but I’ll be honest with you, I despise rolling it out. It frustrates me beyond belief. This is also why I hate working with fondant when I make a cake.

Sorry, couldn’t resist! Anywho, more often than not, it’s pilsbury to the rescue! My OCD really loves how the crusts are perfect circles when you roll them out unlike my own hand rolled crust. But I digress…

You’ll need:
-1 box of refrigerated pie crust (2 crusts per box)
-4 apples. I use 4 different kinds of apples: Granny Smith, golden delicious, red delicious, and gala. You can use any combination of apples you so choose or all the same kind if you prefer. I personally like the different tastes the variety provides.
-1 pie tin
-1 small mixing bowl and 1 larger mixing bowl
-cinnamon, brown sugar, sugar, apple pie spice
-vanilla flavoring and caramel flavoring
-1 stick of butter

Preheat your oven according to your pie crust packaging instructions for 2 crust pies. Usually 375.
Peel and core your apples and slice them as thinly as possible. I put the slices in the large bowl as I cut.

Line the pan with the first pie crust and trim edges with a knife or kitchen shears if needed. I use my hands to mix up the apple slices so that the different types are evenly distributed. Once mixed well, fill your pie crust and place the stick of butter in the small mixing bowl.

Microwave butter for about 45 seconds or until fully melted. Add about 1 tbsp of sugar, 5 tbsp brown sugar, and a sprinkle of each cinnamon and apple pie spice. Mix it well and pour about half of the mixture over the apples.

Lay out your second crust on a cutting board and use cookie cutters to make a design or cut the crust into strips to make a basket weave design if you want. Place the crust on top of the apples, press firmly all around and trim edges if needed. I like to put the crust cutouts back on top. Looks nice and the crunchy crust pieces are the hubby’s favorite part. I then take a fork all around the edge and sprinkle top with cinnamon.

Ovens will vary but you’ll need to bake it for about 20-30 mins or until your crust looks golden brown. 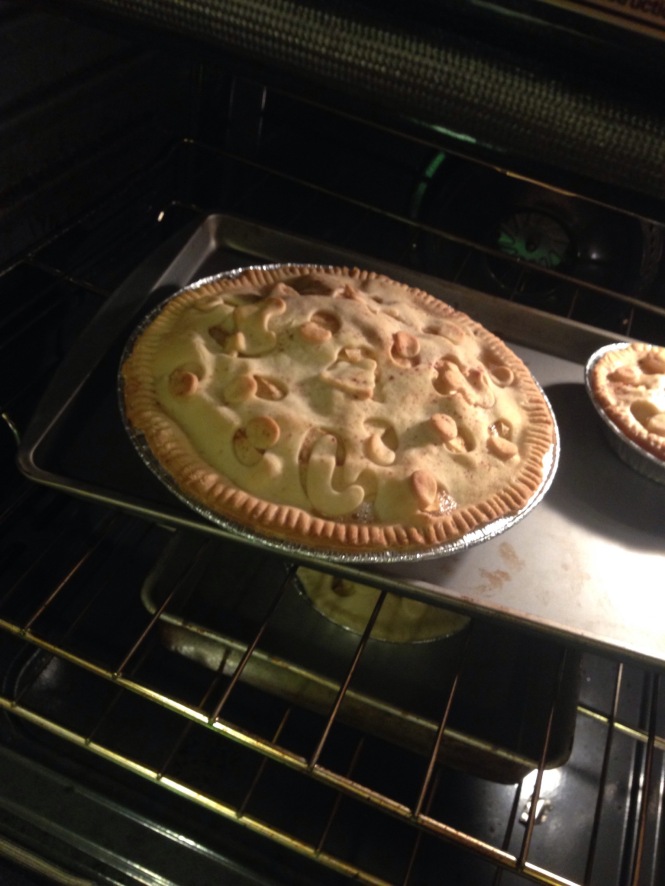 Now, I usually have some leftover crust trimmings, sliced apples, and buttery filling on my hands. We don’t let that go to waste! Take an extra apple, (I used a golden delicious here) and use a knife to cut around the core. Use a spoon to dig the insides out. I rinse the apple and pour a little of the butter mixture inside it. I twist it around to make sure the inside is coated. I line a pan with foil and place the apple on it. I then take a handful of leftover apple slices and dice them before placing a handful on the pan. Drizzle a little buttery/sugary goodness over the apples and mix around. I use the cookie cutters to cut out a few shapes from the pie crust trimmings and place them in the pan as well.

I bake the apple next to the pie for about 10 minutes or until it’s nice and soft and the pie crust shapes are nice and flakey. Place the hot apple on a plate or in a bowl, place a scoop of vanilla bean ice cream inside and top with baked cinnamon apples. I sprinkle a dash of cinnamon over the top and add a pie crust shape for garnish.

Grab a knife and a fork and enjoy! Delicious!

Going to quickly share one of our favorite quick easy meals with you. My kids can smell these a mile away and always get super excited when I make them.

You know the drill, gather your supplies:
-1 lb lean ground turkey
-Shredded cheddar cheese (about 1/4 cup)
-BBQ sauce of your choice. (About 1/2 cup). I use sweet baby rays sweet and spicy sauce. It’s ah-maze-ing!
-about 1/2 cup of bread crumbs, crushed crackers, or oatmeal (I used bread crumbs here)
-bacon bits jarred or fresh
-1 egg
-seasonings of your choice (optional). I use my old trusty garlic powder and onion powder.

We often choose asparagus and white rice or cauliflower rice as our sides. I start by chopping the ends off of the asparagus and laying it out on a cookie sheet. I then drizzle some coconut oil and squeeze a small lime wedge over the top and use my hands to toss and coat it. I then sprinkle a little pepper and sea salt and toss them in the oven at 425 degrees.

While those are busy getting extra delicious in the oven, toss all your meatball ingredients in a mixing bowl. Only use about 1/4 cup of the BBQ sauce and save the rest for the pan. Mix well. 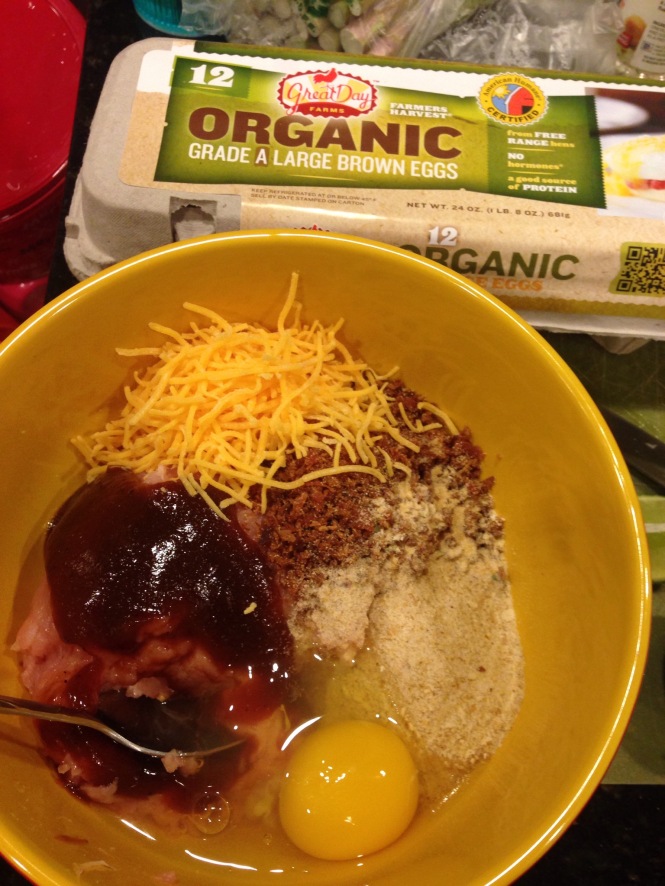 Pour the remaining BBQ sauce into a pan, add a little water, and mix around before turning the heat on medium. While your sauce begins to warm, use your hands to roll meatballs and drop them into the sauce.

You can add more sauce and water if needed/desired. Turn meatballs often for even cooking and sauce coating.

While these are cooking, you should start on your rice. I don’t think you need an instruction on how to make instant white rice do you? Lol

By now your asparagus should be perfect. Remove it from the oven, serve it all up, and enjoy!