Last Thursday, I woke up feeling great!  I was seriously ready to take on the day!  I got up to make lunches and get the girls ready for school while Dave slept in a little later before heading out for work.  I did my first morning drop off and only had to take 1 kid with me so I fully enjoyed a little praise and worship with the windows down and sunroof open kinda drive home.  When I got back, everyone was up and at um so I went in to make the bed because an unmade bed just irks me all day!

Any guesses as to which side of the bed is mine?!?!?  Geeeeez… I don’t understand how that man sleeps! 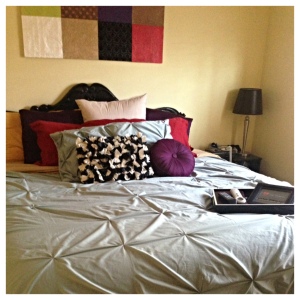 Dave took T to school so after the bed was made, I moseyed on over to my Keurig to brew myself a cup of heavenly Coconut Mocha coffee in my favorite “Shhhh… Mommy’s not coherent yet” mug.  I plopped myself leisurely on the sofa to snuggle with the littlest menace of the house while watching “toons”.  I tried to get a picture with her but she told me “no” seems to be her favorite word these days!

We hung out watching “toons” for a bit then went into her room to do about 18 wooden puzzles and then read about 15 touch and feel books.  By 10:30, little miss priss was ready for a nap!  I lay her down and said “I love you” and she gave me the usual “tooooooooo” in reply.  I shut the door and practically skipped to my bedroom to grab my bible.  Yep, it was going to be a great day!

I opened my bible and sprawled out on the bed for my daily (okay, you caught me, more like my thrice weekly) devotional.  It was actually a really good word about allowing God to guide you through the nine billion decisions you have to make a day instead of relying on your own judgement.  Yep, I needed that!  I’m really enjoying this “Daily wisdom for Mothers” devotional journal. 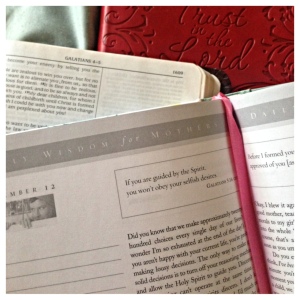 I was just wrapping up when my phone started ringing and P’s school was flashing on the caller ID.  I answered assuming they needed a volunteer for something but nope.  It was worse. Much worse!  They informed me a child in a lower grade had a confirmed case of lice and that I needed to come inspect my child’s head with the nurse to ensure that she hadn’t become a buggy breeding ground!  Lovely!  I called my mother who was luckily available to come stay with the sleeping baby while I dashed off (without so much as showering mind you) to bug hunt.  When I was a few blocks from the school, my phone begin to ring again.  It was Dave, I figured he was calling to tell me he had made it to his rig in one piece.  “I need you to call me a tow truck” were the first words out of his mouth.  It seems he had a double blow out in the middle of nowhere about 2 hours from home.  Thank God he was alright!  The damage to the truck was minimal and he didn’t flip despite both the right tires being ripped to shreds.  His fender was a little messed up and his step rail on that side was bent as well.  But thank you Lord he was okay!  I sat in the parking lot of the school and made some phone calls for him as his service was pretty patchy where he was.  As I waited on some calls, I went into the school to see what the situation was with P.  There were a couple of girls in the office and the nurse informed me that she thought she had seen a single “nit” on her head but was unsure as P has very dry scalp and it could have possibly been a flake instead.  We searched and searched and never found it but thought it best to treat her just the same as a precaution.  Better safe than sorry, so I brought her home with me.

Meanwhile, back on the side of the road, we had determined that a towing company could pick Dave and his truck up and tow it to the closest town’s tire shop to get him back on the road.  Long story short, after quite a few phone calls back and forth, we determined the local tire shop didn’t have the correct size tires in stock so they wouldn’t be able to fix it that day.  He had to get back on the road to work so this wasn’t an option.  I called our local discount tire and determined that they had the correct tires in stock and ready for pick up.  As luck would have it my mother was off and available to keep the kids so I could go pick up the tires and drive them 2 hours to meet Dave at the tire shop in Pecos so that they could mount them and he could be on his way.  By the time I got there it was around 3:30 and Dave was on the way with the tire crew.  Poor guy had spent  4.5 hours on the side of the road waiting for tires!  I had a little time to kill before he got there but I was starting to panic because I hadn’t yet showered and had my hair in a tangled ponytail under a baseball cap.  I was wearing athletic shorts, a t-shirt, and running shoes.  Normally, this wouldn’t have been an issue but it just so happened on the crazy day that I’m running around like a nut, I have somewhere to be at 6:30!  My best friend had made us a reservation weeks earlier to a dinner/painting class at a nice restaurant.  So naturally, like the dysfunctional domestic diva that I am, I stopped in to the friendly local Wal-Mart in Pecos and rummaged through the racks for something suitable to wear to dinner!  I snagged a black dress, a mustard yellow cardigan, some colbalt blue flats, baby wipes, a travel bottle of shampoo, mousse, and a package of elastic headbands and was on my merry little way out the door after spending a mere $32.81!!!

Once I arrived at the tire shop, I moseyed into the bathroom, locked the door behind me and slipped my new ensemble on.  I used the baby wipe to “wash” my face, and then took my cap off to survey the damage.  Just as I suspected there was no way in hell to spruce that rat’s nest up so I did something that I’m not quite sure that I’m proud or ashamed of…  I took my tiny little travel bottle of garnier fructis out and washed my hair in the sink of a tire store.  I grabbed a handful of paper towels and dried it the best that I could before scrunching it with the t-shirt I had been wearing earlier and a little mousse.  Dave about fell over when I walked out in a whole new outfit with wet hair!  Once in the car, I slapped on some makeup, a spritz of perfume, and hauled a$$ back to Midland!  Not too shabby for a Wal-Mart makeover in a tire store huh?  hahahaha 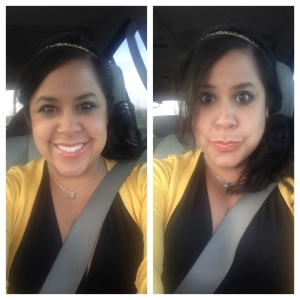 I don’t wear flats often but, I actually think these are pretty cute for $11!

I pulled up to the restaurant at 6:35 and we found our seats and joined right in with the rest of the group on our peacock painting lesson.  Even though I had a crazy terrible day, it ended with friends, fun, good food, a couple of glasses of wine, and pretty peacocks.

Okay, I won’t be selling any paintings in the near future, but not too shabby for my first major painting.  It was so relaxing!  I’ve been trying to think of something else to paint all week!

They had a contest to see who could come up with the best name for the painting and the winner got a pair of hand painted  peacock feather wine glasses so I gave it a go with “Do these feathers make my butt look big?”  and wouldn’t you know I WON!  Yay! 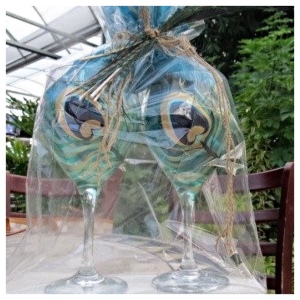 As I sit her tonight, almost a week later, testing my new wine glass out, I have to think to myself.  Geeez.  that was a stressful day, but all is well that ends well.  They say God never gives you more than you can handle and I guess maybe that is true.  Or maybe when he gives you so much to handle, he likes to toss in a happy ending to lighten the load.  Whatever the case, even though 2 new tires cost me close to $1,000 and I spent half  the day running around like a chicken with my head cut off, I’m grateful that His protective hand was on my husband in a scary situation.  I’m also grateful for the 1 random clearance dress in all of Pecos, Texas, a fairly clean ladies room at Pecos tire, a great mom who came to my rescue on her day off, and good friends who laughed with me about my day.  All in all, I would say it’s a beautiful life even when it doesn’t go the way I plan.  Yep, I’ll drink to that!  Cheers!